A Road To Joy is out with an editor right now. I’m hoping to have a copy in my hand before I head to the Yukon in June. The wait is killing me!!!

I wrote the novel after several attempts to somehow tell the story of my own grief after the sudden passing of my husband, Paul. I’m not bad at writing emotion; but have never been able to tap into the deepest of my own feelings about my experiences. So there were several failed attempts.

This book is actually a combination of three of those failures. I had started what I expected to be a comedy about a mom who’s just had it and runs away from home. Because what mom hasn’t thought about that? But I also had a chronological accounting of my ordeal: something even I didn’t want to read. And then there was the crap attempt at tackling the whole thing from the points of view of me and each of my kids. Blech.

But still, a story was nagging at me. For more than two years, something kept bringing me back to the need to share it.

I finally realized, at four o’clock in the morning when all of my best ideas come, that I should give the Comedy Mom my story. She’s running away from home. Because she has five kids and her husband died. At the time, I truly believed I could make that funny.

What followed was six months of the most intense emotional writing I have ever done. And a story that I feel speaks to anyone who has ever experienced a loss that has ripped their life apart. Whether through death, divorce, change, or illness, loss of what we thought our life was going to be, loss of future, of plans, of self is the most devastating trauma we can face. I would go so far as to say that it doesn’t matter so much what or who you lost, as much as how much that loss knocks you flat.

When you are suddenly faced with a life that leaves you without the will to go on, without a reason to go on, without an expectation that things could ever get better, the English language fails us completely in its inability to describe that level of torture.

I did my best to change that.

I gave this mom my circumstances, widowed, mother of five, lost, angry, hopeless, and put her in her van. Then I let her tell her own story.

There were times she reached deep into my heart, ripped out parts of my own story and used them as hers, tearing me apart in the process. There were times she told of experiences in her own past, of her family, of her grief that I had no idea even existed. She made me laugh out loud; she did turn out to be quite funny. And she brought me to my knees, over, and over again.

I learned so much about her. I had no idea she was so angry. I didn’t know that she was so desperate. I didn’t expect her to be so lost. But as I got to know her, I began to realize that I was angry, too. And I was desperate. And lost. Only I hadn’t known it while I was in the middle of it. Much as I hadn’t planned any of that in the story.

In writing the story, I was able to recognize my own grief, to see my own journey for the triumph is actually was. I was able to see myself for the strong, resilient, amazing woman I am, and have been as I led my family back into the light.

And now, it is my deepest wish that, in reading the story, that you are able, too, to see some of yourself in her; she could be you. That you can discover your own strength, find your own purpose, and build your own hope.

If you are here now, I want you to know that I’ve been there: lost, alone, finished. I’ve come through the other side. It wasn’t easy. In fact, it was hard as hell. But I’ve done it. And I’m strong enough and awake enough now, to want to reach out to help you discover the most surprising thing I’ve learned these past few years.

Join me. Talk to me. We are strong. We are infinitely stronger together. We got this.

A ROAD TO JOY 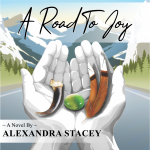 Alex’s signature novel, check out the website, join the discussion, get a copy.